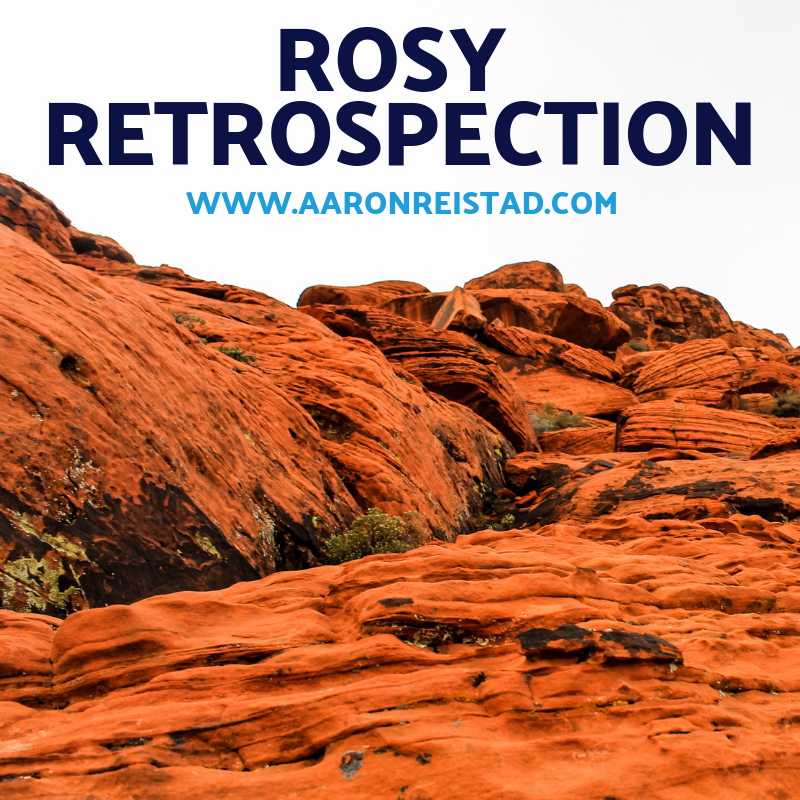 In my previous blog, 5 Things I Took For Granted When I had My Sight, my first sentence stated, “You never know what you have until it’s gone.” But, what if I was wrong? What if we know exactly what we have while we have it? What if, while living in the moment, we experience the most honest perspective we will ever have of that exact time? What if no longer being there, and reflecting on the “good old days”, makes us misremember what it was like when we were actually there?

We have all been guilty of looking back on the past with “rose colored glasses”. A study from the Journal of Experimental Social Psychology discovered that after experiences were had, participants tended to remember their trips and experiences as being much more fun than it actually was at the time. Have you ever gotten out of a not-so-good relationship and looked back, only to remember the good times? Have you ever gone on a mediocre trip, but looked back fondly at the photos as if all your good times only lived in those moments?

Rosy Retrospection refers to the psychological phenomenon of judging the past disproportionately more positively than the present.

I recently caught myself wearing my own pair of rose colored glasses.

Upon graduation from Florida State, I moved to Blacksburg Virginia to work at Virginia Tech where I stayed for two and a half years. This period was filled with many blessings, but there were times where I struggled both personally and professionally. By the time it came to leave, things were at an all-time high. The friendships which surrounded me were strong, the colleagues in my office and at Virginia Tech were people who cared for me, and I for them, and the work I was doing gave me a sense of purpose and was something I believed in. So when the opportunity came to put Kate and I’s two and a half years of long distance to rest, I knew I had to seize it.

In some ways, leaving Virginia when my happiness, relationships, and purpose were peaking was the perfect time to depart. This allowed me to move to be with my then fiancée, and feel as though if not for long distance, I could stay here for many more years. I was able to hit the road to Ohio and close this chapter of my life on a happy note .

In other ways, leaving Virginia when everything was so good was extremely difficult. Transitioning out when things were at an all-time high, left me with a sense of longing and loss for what I had developed personally and professionally. I found myself having difficulties adjusting to my new life in Ohio because my job, friends, and life did not make me as happy as they did when I was at the end of my time in Virginia. I was left feeling like the Blacksburg chapter of my life had been finished too soon.

A little over a month ago, I returned to Blacksburg for the first time since leaving almost 11 months prior. Going into this trip I was excited to spend time with those who I cared for, reconnect with others, and visit a variety of my favorite places. There were parts of the trip which went exactly or better than I could have hoped for. In contrast, as the trip came together and throughout the visit, I began to understand that I was experiencing rosy retrospection.

The food and beverages at my favorite spots no longer tasted how I remembered. The office which I had worked in and struggled so immensely to leave, now had different faces in the chairs. Most notably, There were people who had spent countless hours with me during my time in Virginia and who had brought me to tears at the thought of leaving them, who now had no interest in maintaining a friendship.

I am not going to lie and say that it was not difficult to go through this. Part of me felt betrayed and let down, and I began to question if what I thought I had in Virginia when times were so high, really even existed. But even through the difficult feelings, I realized that going on this trip was exactly what I needed. Going back gave me a sense of closure which I had previously lacked.

Prior to going on this trip, Virginia had still held a piece of me. As I returned to Ohio, I felt like I was returning home. I finally felt as though my head and heart were content with the place I had been living for nearly a year.

In the almost year since moving, I had always believed that if the right opportunity came up that I would move back. In my mind I would be returning to the same people, office, and town I had left. But this is not, and will not ever be true.

Now I am not saying I will never return to Virginia, but if I do, I now know that it will not be the same, and that is ok. Knowing what I know now, I do not negatively view the people or places who did not meet my expectations during this trip. Instead, I am now able to look back on that chapter of my life and recognize the happy times as being happy, and the tough ones as tough, without a sense of longing to return.

There are so many of us who look back at relationships, locations, and events and wish for nothing more than to be able to go back. But this is impossible. People change, locations change, and we all change along with them.

As Andy from The Office so eloquently puts it, “I wish there was a way to know that you’re in the good old days before you’ve actually left them.”

This is a great quote and a tear jerker during the finale for sure. But, Andy’s statement seems to be the epitome of Rosy Retrospection.

It seems to me that it’s ok and normal to look back fondly at the past, but wishing to return to what once was, might leave one disappointed.

When looking back at the good old days, be aware that you might be doing so with rose colored lenses on. There is no need to take the glasses off, but your awareness of the past can be crucial for your happiness now.

Remember that the good old days you are daydreaming about were once just your everyday, and that in 10 years you will be looking back to the friendships, locations, and events you have right now. Do your best to not wait until they become the good old days to appreciate what you have, but instead cherish what is in your life and the opportunities within it right now.